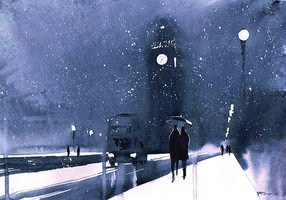 It was true of this, true of him, the lies he told lefty me riddled in confusion. Every syllable left me questioning myself, asking deeply what was it about us that made him tell so many lies. Each breakfast date, each luncheon, a new story was spilled. I'd clink to my coffee mug, unsatisfied with a new pitch about a life that never existed. " I went to Barcelona last week," i nodded aptly, already bored.
" How was it?" I supplied.
" It was incredible, i saw the," then he went into a steely monologue about all the beautiful things he saw, i felt myself clutching the green in my stomache. Maybe i was Sea weed, maybe i needed to believe he was such a liar because i needed to believe these things weren't real. This him, that Patrick was, the exhibit of an explorer. It made me feel like an ink stain on an A3 sheet of paper. My family are extraodinary people, but we've never ventured beyond our local Cornershop. My mother has a fear of all things new, and all things cultural. I stirred my Coffee with the plastic spoon, i took a bite of the sugar donut, because i was so fucking angry at him, and life being so damn unfair. " What else did you get up to this Summer?" I offered whilst glancing at the couple knotted together like a Cane row on the opposite bench.  " My family are going to Van couver next week, wanna come?"  I scanned his pinched features. From the shiny bob of chestnut hair, green eyes, and pursed lips, to the cafe au lait skin, that once upon a time, i had yearned for. Patrick did that to you, and then you were a black hole as if the feelings you had, had never been there. I anchored myself regularly, justifying that he was too beautiful to part with. That girls like Kia Moore don't get guys like Patrick Cansey, a man who looked like he'd literally jumped off the pages of a glossy magazine. In comparison to him, i compare my self often, i was slightly rounder, my ex boyfriend told me i didn't have an especially beautiful face, i had handsome features, but tits that made him sing like the choir.
"It depends on the dates your going, what will we do there?"
" Fishing, Swimming, diving, ever been jet skiing?"
" No not so much, but it's something i'd like to try." I lied. I didn't want to try any of it, i was tired of feeling grateful around Patrick. Someday's i wondered where the Venom came from, maybe they were my insecurities. People say i have beautiful eyes, but their hardened like grey marble, my features are bold and pronounced. A strong Aqualine nose, high cheekbones, a voluptuos mouth, and skin the colour of warm chocolate, well it was said in a chat up line.
"Patrick.It's over." The fork froze in his Salad, his mouth was half open, he had a look in his eyes like a deer pleading not to be shot by a hunter. I straddled between an Apology, an excuse, a handkerchief, or to simply start sobbing. I would remember what i did for the rest of my life, as if i had replaced myself with someone else. He cleared his throat, wiped some dressing from his mouth with a tissue, and took a swallow of the Champagne glass beside him. I simply picked up my purse, scraped the chair back, and readied an exit.
" I'm sorry," i said, " i don't have the feelings i should have."  He nodded, as though he wanted to say more but pride wouldn't allow it. " I'll miss you, take care." He returned to his Salad. I was an icicle, where was the weeping, the mourning, the sick tears of loss, the on his knees pleading with me not to leave, hands wrapped round my steely fist, the secret engagement ring, the song he would recite. There it was, in a nutshell, and i knew it. He was done, long before i was, in Patrick form he was waiting for me to do the hard work. I took another sip of Coffee, knowing i had always been paranoid about these things, always felt the scales didn't balance in some way. I bit my lip till it bled. Stood up, and took bold steps toward the exit. I glanced back at him, his frame temporarily melting in the distance. For a giant he looked slightly smaller, had this been what was lurking inside all along? Did i want to see him crumpled, broken, torn to shreds, something like anger arose in me, he was too cool. Patrick had always been as cool as a cucumber, it scared me at times, made me a spec of dust in the middle of the floorboard.  A year later Patrick was married, and as i flicked the pages of new business Magazine, there he was, in the man to Watch section. Chastity Kane's article predicted he'd be a millionaire in the next two years, and Aztec zoo his electronics brand would make it's first million by 2016. I had been the only liar in our relationship.