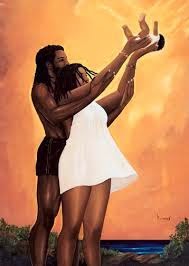 It was the words that sung to him, chapter and verse, words that clung like film , soaking him in the wisdom that was truly kept. He liked her stride, a quick confident March as she sliced the air, ever organised, the ease of which her day was kept. Beauty was an unconventional thing, and for him, Jada described his wife as no Oil painting, neither a monet, but in his eyes gems were hidden behind those two orbs. The greenlight was a dimpled smile that Captured those who dared, slide closer. Chapter and verse, she was his, and it was a closed book. Yet when Jadan Arian Mitchan looked at the open shop doorway, summer breeze blowing his dreadlocks away from his nape, there his wife stood, his afternoon conversation, sharing dialect with Satan X. Satan X he'd nicknamed the man was the ultimate stalker, Cassidy could go nowhere without a call from him pinching strings of her time. Be it Spring, Summer, or Autumn, Jasper always had " a situation at hand".
"Arsehole", he blurted the word out as though it were accidental loose air. Satan X or Jasper cronenberg, " has to be some tall good looking mothafucker," he groaned to his best friend Missi over the telephone wire.
" Bastard has to be rich as well, you know what that fool did?"
"What," Missy supplied in her casual tone, he had a visual of green eyes rolling and eyebrows being tilted up.
" Pearls. He had to show me up, gets my wife pearls, and i have to stand there.....look what Jasper got me," he mocked. Damn he hated how Naieve she could be. Yet women weren't blind to riches such as a Royal Benz, a house in Monaco, a Studio appartment in Greenwich and this fool was still calling about " a situation." Jasper hissed angrily, sucking air through the gap in his teeth, his dark skin felt toasted in the hot sun. This heat was killing him, what was even worse was the envy he felt, bright red loud as symbols, throbbing at every pulse. Enough with this bullshit. For the first time in his life, he was ready to confront the devil. Small fists were balled up, his nearsighted eyes scrunched in  anger, mouth sandpaper dry. He felt dirty in his un ironed slacks, crisp white shirt, the collar had a dark rim round the edge, and his feet felt crushed in shoes that were a size too small. " You lovebirds look happy," Jada offered in a pretend casual tone. He hated Suits, there was something so smarmy about them, as though every conversation was an investment opportunity, your money not theirs. Jaspers Suit should have looked ridiculous, christ it was green. Sadly whoever this lightskinned brothers tailor was, this was a tailor to the start. " You forgotten your house address  Cass,"
" I beg your pardon-"
"Wife.Wife.Wife and wife back the hell off!"
Cassidy leaned back in horror her smoky grey eyes not being able to hide her embarassment.
" We're just having a-"
"Situation." Jada offered up. He usually finished the sentence of idiots, it saved them time communicating with the world. He scanned his wifes soft features, from her pecan skin, to her soft lips, and high cheekbones, this was his past, present and future. " I don't like your hair like this by the way." Fingerwaves. They suited the Cronenberg but they didn't fit his wife. " You wanna marry this pretty boy in his grasshopper suit,"
she raised a stern finger. " First of all don't you ever tell me who i can and can't talk to," she framed her curvy frame, with soft small hands, " and Jasper whatever the situation is, i'm sure you have more than one member of staff." The look Jasper gave, rewarded Jada's suspicions.
" Why i was only suggesti-"
With a quick wave of the hand, Cassidy returned her attentions to her husband. She dragged him by the arm, marching away swiftly, leaving Croenenberg junior open mouthed.
" You better explain yourself, as soon as were done with upstairs."
Jada nodded his approval, his features already beaming, and a seductive smile already teasing her clothes off.
Jasper situations were just too staged, and Jada's dumpling soup was just too damn good.
ambition art creative expression passion poetry vision writer