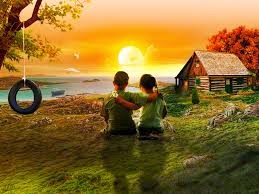 " You make me want to ask the world a million questions," Aisha Croft sat at the edge of the Silver lake, her feet tingled with it's Icicle promise. Leon Ridd to her left.
Aisha pressed forward for the promise of a kiss. Leon leaned back, the moment was burdened with an awkward silence.
" It's cool," she muttered, the stain of disappointment clearly on her expression.  She liked the long walks with Leon round Lovers Keep, she'd watched Lisa bones get pregnant from her window, wondering how someone could engage in such a private act, in such a public place. Then Leon came with his Magazine smile, and sultry brown eyes, and they visited Lovers keep together. It was a magical place, especially in summer time. The pearl swans were your lookout, the rosebuds in bloom, yellow daffodils and aztec flowerpots, buzzed with the electricity of Grasshoppers and angry Bees. The fish in the pond were distinctly different to the lake, some were striped, others were wrapped in tiger print, and Japanese Rumblefish played games of Tagg. It was floral lit, and it was weird but officially known as Crompton Keep, Lovers keep was something different to the Young people. Aisha tossed a spray of silver Water up at croaking duck, Leon giggled. " You've made that duck angry now,"
" You've made me angry." She bit back suddenly.
Leon rolled brown eyes, Aisha dimpled a smile, then spoke in her Canderel tone. " I always feel left behind,"
"You mean from accidentally ending up a single mother," he snapped back. His tone was a whip. He grabbed her by the shoulders, turning to face her, her Chocolate Adonis. " Being a single Mother is tough, i should know my Mum's still drowning the gin."
Aisha knocked his arm off angrily. " I feel hideous compared to the other girls, i have pimples for breasts i've never been kissed before,"
"i've seen guys checking you out Aisha, it's your Attitude they run from." Aisha slumped her shoulders, her honeyed Skin, lit beneath the Orange Sun. "If i were to tell you a secret, would you judge me,"
"i would " Leon smiled, "but tell me anyway."
"Ever since you started walking with me, and were in the library reading books together, or that time we sat on the Picnic Bench," she swallowed a gulp of air " i get sticky, all the time. I get sticky."
Leon groaned. He took her hand softly laid a Voluptuos kiss of her fingers, then scraped the threads of dark hair from their Cushion spot on her forehead, a gentle kiss was placed there.
" That's what's supposed to happen." Aisha swore she could see stars behind his eyes, her mouth saliva her stomach felt hungry,as she leaned in eager to cease the moment. A stern finger was placed on her lips,
"your Fifteen now, but i promise you." His tone was heavy seductive. An arm was wrapped around her small waist as she was dragged unto his lap. She felt something thick and strong, hard, pressing against soft buttocks. Her body felt flushed with heat, and as the scent of Midnight Musk filled her Nostrils, and she felt his heartbeat rising stealthily, she pressed closer, feeling both safe and guarded in his arms.
"There will be a time for us.That time will be infinite."  At that he gently lifted her placing her on the hard ground to the left of him, and glanced quickly at his watch. " Quarter to seven, Mums cooking Sea Bass, with Spinach ." It fascinated her how Leon Ridd was always man and boy in one body, as he arose to leave, Aisha nodded a simple understanding, and watched his tall frame, clad in new green Combats and an Army boy Navy blue t-shirt disappear down the Long winding path towards Mulbery Lane. Aisha was desperate to grow up, yet eager to stay young forever. She'd heard stories about places like Lovers keep being closed down. Mumbling small prayers, she realised that one day she would be cooking Sea bass for Leon Ridd, a warm sensation filled her stomache, and she rose slowly preparing for the long journey home.
art creativity expression fiction foundation literature poetry vision writing