The brotherhood of men 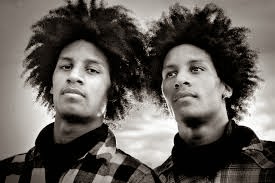 "There's a difference between you and i," Callifa looked hard at his twin brother. Isolated in that small space disengaged from a world of childish things. There was a difference, and it was becoming more scary, annd more real. " How many did you take this time?"
" Enough to fade,"
" What are you running from man?"
" From my fucking shadow," Ryan bit back. " Jesus from you. We wont be joined at the hip for the rest of our lives, ya know?" It was the drugs talking, as much as Calliffa knew this, he felt the stinging, like a blunt shovel being dug into the heart. The dreams started in second year of high school, those clammy sweat filled dreams, where he'd have to rock his other to sleep, and tell him father wasn't dead. He was just a selfish man that's all. One trip to the corner shop, and he'd disappeared, a whisper in the darkness, their father was a myth, a story mum shared at dinner parties with a Ciggarrette tattooed to her scarecrow fingers and a glass of brandy in her other hand. He disappointed you with a smile, and on the inbetween  days when you were a bridge crosser, you realized you were still walking on a tightrope. " What did you man?"
Ryan rubbed his eyes, they were blood shot, the needle he used had found it's home beside an original copy of malcolm X the book, and the reading glasses he hardly needed but often used. " I never quite get your need Khall"
" Need for what?"
" Just to be...i dunno, i grew up, you didn't."
" You call that shit Growing up?" Calliffa nodded at the sachet of white powder and the needle on the table. " Those aren't what you think. Insulin, soap."
"Why are your eyes so messy?"
" Because it's raining, because it's Sunday, and i called him, and he didn't pick up." The silence was stone. All the equations added up. The mysterious text messages, the phone calls from a stranger, the weird energy between them. " Just cuz your like him, doesn't mean your him."  Ryan pursed his small mouth. He was the spit of their father. His lengthy height, their fathers mahogany brown skin, and green brown eyes, he had sharp features, striking, with an exclamation mark impact. No matter the day, the twins had been told they were the type of boys you looked at more than once, or found yourself staring often, attempting to figure which glossy print you'd seen them in. Yet their lives were little of the glamour their beauty represented.
"How much did you give him this time?" Another long pause. "I said how fucking much did you give that bastard?"
"That bastard is our father!" Ryan snapped. He stood till they were nose to nose, shoulder to shoulder.
"He owes us a childhood."
These arguments were tedious he never learned. Never, never got it, never understood the importance of protecting yourself, your heart, from Adrian Wesley. Califfa's eyes darted to the exit, it was too early in the morning for this crap. If Ryan wanted to be a sucker let him, why did he care? They grew appart years ago, whether he was off the drugs or not. "There's three minutes between us, your not that much older."
"I'm protecting you,"
" Your the reason i'm on fucking drugs in the first place, you know what we did. I covered for you," Ryan released a breathy sigh, he scanned the chaos of their small room, a room that had suddenly become a prison of secrets. A room that begged he exit, for it held too many painful memories. " Bro i'm your lookout, he hurts, and it doesn't sting," Califfa glanced towards the busy exit. Clothes were strewn across the floor as though, it were a route which directed an exit. Ryans brown  leather jacket, the one with the chinese print on the back had been chewed up by their pet Staff Ripper, and the goldfish untop of the bookshelf was barely hanging on. "I've got the latest S.E Hinton book," Calliffa offered, a subject change in hand. He ached for the days they rode through the neighbourhood on Second hand bicycles, did wheelies in front of Angela Rossi and her Chorus of pimpled teen friends,lapping up all the attention they weren't recieving at home. I missed you, he said daily with eyes that pleaded, and strategic questions about events they could happen to be together. I miss you man. He doesn't get you, he's gotten everything else.
" Hey man it's lonely at Governors High,"
"Posh boy with his Posh ties, and fancy pants females getting tired already," his brother nudged him playfully. He side ducked avoiding one of his brothers Kindergarten jabs, "I miss you man, it is what it is."
boarding schools brotherhood communication connection creativity family fiction friendship love promises team twins