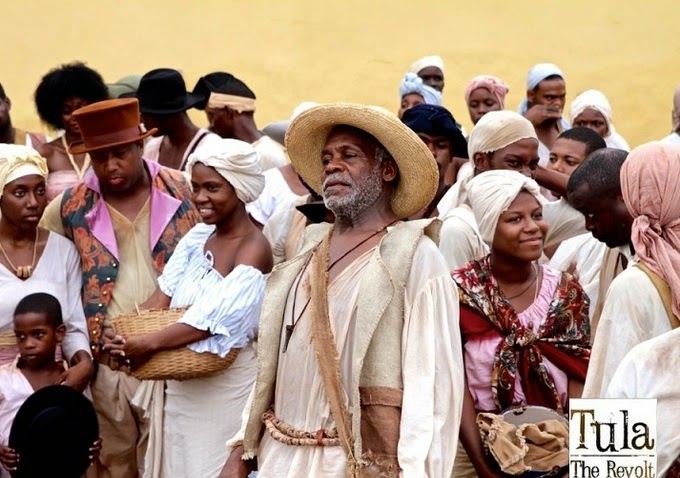 Tula the revolt Written and directed by Jeroen Leinders,starring  Danny Glover, Jeroen Krabbe, Deobia Operia, Paul Bazely   is a captivating cinematic piece based upon the leader  of the  1795 slave  revolt on the Island of Curacao for over a Month . Today he is recognized in Dutch History as a fighter for Human Rights and Independence.It explores one slaves rebellion against a prejudiced economy in Curacao. Tula a slave who works in the field receives word that The Slaves have been freed by way of the war in France. Tula tired of being abused, for both skin and labour, champions an epic revolt, which catapults himself and the other workers from their simple understanding of inequality, to a passioned fight for Justice. A civil war ensues on the land, and each slave finds themselves pitted off against their master, fighting for the freedom that comes with self and a pride in identity. This Epic Cinematic piece is based upon a historical tale on the Island of Curacao. It is a story not taught in Dutch education systems but imprinted as historical noun. Sewn within the threads of culture and identity.
Cinematic , enthralling,engaging and captivating, Tula the revolt communicates a powerful message whilst having you at the edge of your seat. One mans s struggle against an apartheid, which kept his people hostage , and maintained the unfulfilling life of a slave. Unlike any other piece about slavery , johanne leiner has dynamic charcters who translate as complex dynamic and even comic  despite their plight. Tula a field slave is alerted to the news that the masters slaves have been given the right to freedom. Despite the fear Tula  incites a sense of unity between his workers and comrades this incites a defiant resolve to Campaign against the master and prejudice government bodies.


The characters are charming and engaging, as the story unravels we are aware this is no more a roots than it is a twelve years a slave. It is a film that promotes strength without focusing primarily on the victimization of black people, more on the belief that they are worthy of the same equality awarded to other races. The book just as captivating as the film, draws you in immediately. You are hooked, and find yourself
fully empathetic towards this characters, and identifying personally with them as though they were sibling or family friend. They are characters you care for, characters you fight for, and whose dream you’re content was eventually realized. Based on Historical fact, the book is scenic and visually stunning, the language transports you to a time far from here, and you find yourself, eagerly scanning the pages and animatedly looking for new gems of fact about these key characters. It makes you want to delve into a much secreted history, this book is a must read and the film a must see. It is History appreciated.
amazing book creativity deutsch excelence great film tula the revolt