The legacy of lost ones 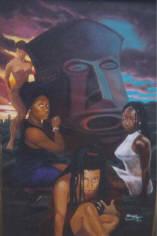 A while ago I heard some idiot shriek to me, "your just a nigga!" We are more than this, I am potential,creativity,wisdom,enlightenment,growth,vision, passion. Growing up, I rarely acknowledged the social prejudices against black people, it was hip to be black, cool, and yet I am now a 31 year old woman blown away by the prejudices I've experienced, by cultures which were socially alienated themselves. On the day an Asian boy called me a Nigga, and a network of Asians laughed because I dared to say I find Asian people attractive, it has been clear to me, that there are people out there who don't see history, or a business background, or my years in education. At one point I even had a family who sell drugs sobbing me because of my dark skinned complexion. I was called a Nigga , a know it all, by imbeciles who police literally live outside their doorsteps.


I have spent years building up a knowledge base that I am proud of, wearing a skin that I am proud of, celebrating a culture and identity which has experienced limbo for years. In 2016, I celebrate that I am a dark skinned woman with a disability, who single handedly started a business where she worked with Prince Charles, the Fa cup,red or company a firm that deals with Sony, crazy clothes, a vintage store that worked with Naomi Campbell ,Kate Moss, and were one of the first black companies to brace the covers of Itallian Vogue, I am part of an oil company and despite self publishing my book lunchbox millionaire, I am both prolific in publishing and self publishing. Redebonyhotspot has made over 248,000 hits, the website is being updated. Despite dealing with the epilepsy, I have decided that my pandoras box of ideas will be used to aid others.

Recently I also got told that as an epileptic, we are laughable. Far from the truth.knowledge and wisdom is empowering, let others say what they have to say, if it validates them. I have been bullied, I have been alienated at times, but one thing is key, I've grown to have a greater loyalty to myself. Stupid people are a threat to society, people who simply follow on demand are a threat to society, cowards are a threat to communities, let us cross all racial boundaries and leave a legacy.
capital cash incentives creative endorsement finance financial freedom growth ideas income millionaire motivation passion progress success vision